With rising compliance costs in emerging markets and fears of protectionism in developed markets, importers and exporters find themselves caught between a rock and a hard place. But they could find resilient trading opportunities in Israel, suggests Michael Duval, Chief Business Officer at Bank Leumi (UK) plc.

It is now ten years since the global financial crisis hit, and world trade growth has still not regained its former strength. Before 2008, average annual expansion hovered around the 7-8% mark; by 2016 it had slumped to only 1.3%, according to the World Trade Organization (WTO). Last year saw a slight improvement to 3.6% – but this year will see it weaken again, to 3.2%.

The risk of protectionism in the world’s developed markets will certainly not help these figures. In recent months we have heard the WTO again and again implore governments not to threaten the flow of trade by allowing protectionist words to translate into deeds.

Emerging markets, on the other hand, present importers and exporters with only further challenges. Compliance with ever-more stringent regulatory regimes, such as AML, CFT and KYC, has inflated due-diligence costs – leading many banks to withdraw from jurisdictions worldwide. Where are trading companies to turn?

They could look to Israel. Along with low inflation and a strong currency, the country enjoys the solid sovereign credit ratings (“A1” from Moody’s, “A” from Fitch and “A+” from S&P) typical of a developed market. But at the same time, its economic growth rate has far outpaced that of its peers in the OECD: as Chart 1 shows, the IMF sees GDP expanding by 3.4% this year, on top of a 3.1% increase last year and 4% the year before. 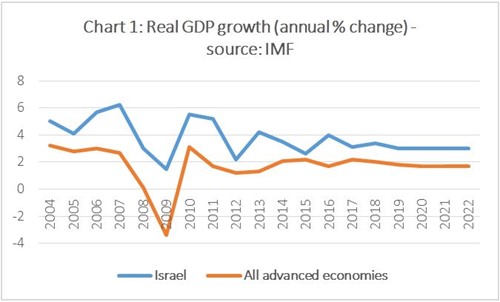 Accompanying this is a growing source of potential consumers and human capital, thanks to Israel’s solid population growth rate. As Chart 2 reveals, this also far outpaces that of the OECD as a whole: 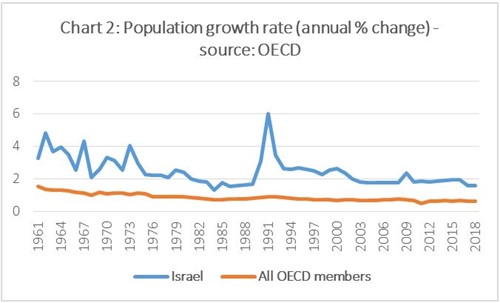 A trade route full of potential

Israel’s trade with the UK illustrates the considerable opportunities on offer to both importers and exporters.

For a start, in the UK, Israeli companies can find an important market for their exports, ranging from agricultural goods, precious metals and stones, to chemical products, machinery, pharmaceuticals, cosmetics and medical equipment. That is to say nothing of Israel’s world-leading electronics and hi-tech software exports. Britain also allows Israeli companies to bridge time zones and provides them with a springboard to reach markets in Europe and beyond.

In Israel, in turn, UK exporters can find an advanced free market economy with demand for machinery, vehicles and aircraft – not to mention the added benefits of shared culture and language, a mature, sophisticated banking sector to provide access to financing, and a robust legal system based on English common law.

Small wonder, then, that in 2011 the UK Government released a white paper, titled “Trade and Investment for Growth”, which stressed companies had the opportunity to “exploit the potential synergies between Israel’s high levels of innovation and British strengths in design, business growth and finance, as well as the UK’s own high technology and scientific strengths”.

exploit the potential synergies between Israel’s high levels of innovation and British strengths in design, business growth and finance, as well as the UK’s own high technology and scientific strengths
UK Government released a white paper

It seems companies have taken that paper to heart; since its release, bilateral trade has only grown. By 2016, the volume was calculated at approximately £5.5 billion; last year, a further £6.9 billion was logged – that is a 25% increase. The UK is now Israel’s largest European trading partner and (after the US and Hong Kong) the third-most important destination for its exports worldwide.

The pharmaceuticals trade is a particularly notable example: consider the fact that one in seven of the drugs prescribed by the NHS now comes from an Israeli company. The trade in tech is another: for those Israeli entrepreneurs who have built an industry considered second only to Silicon Valley, London remains the “go-to” destination for their international expansion – thanks in no small part to both markets enjoying similar access to funds, skills, consumers and capital.

Over the past two years, there has also been a 28% rise in the numbers of Israeli companies establishing operations on British soil. This takes the total to around 300, of which a tenth are currently listed on the London Stock Exchange. At the same time, this activity has generated a 33.5% increase in Israeli investment in Britain – which now attracts the bulk of Israeli foreign direct investment flows to Europe – in addition to creating 12.8% more jobs in the country.

At Bank Leumi (UK) we’ve seen this process at first hand. For example, only this year we financed the £14.75 million acquisition of a British flavours company – Flavours & Essences, based in Blackburn – by Frutarom, an Israeli fine ingredients company pursuing its global expansion. (Frutarom has also made headlines recently given its own $7.1 billion acquisition by ingredients manufacturer, International Flavors & Fragrances.) Beyond food, we have accompanied trade flows in everything from clothing and cosmetics to capital goods, software and satellite technology. In this respect, we support the working capital needs of two UK subsidiaries of a listed Israeli maker of PVC and polycarbonate sheets, used in the roofing and cladding industries – which, in turn, helps the British manufacturers both to sell in the domestic market and to export across Western Europe.

Indeed, the benefits of such cooperation extend across the globe. Over a period of five years, for instance, we provided financing to the UK daughter company of an Israeli producer of additives, compounds and colour masterbatches used in the thermoplastics industry; in 2016, this helped the British firm to begin expanding its international presence with a new manufacturing plant in China.

Of course, with all new markets come new challenges, and it is not unlikely that, for most companies, this particular trade route will be relatively off the map. Being unaccustomed with the local market can raise the perception of risk, and reduce the confidence to engage in trade – even though payment and credit risks in Israel are actually low.

But banking partners can support them with crucial local knowledge of both the British and Israeli markets – along with the trade and commercial finance, working capital and acquisition finance and treasury services necessary for day-to-day operations. That is why, as the UK subsidiary of Israel’s largest bank, we seek to bridge the gap between London and Tel Aviv.

In uncertain times for cross-border commerce, companies should be on the hunt for resilient markets. They could find one in Israel.