Israel: Not just a “Start-up Nation”

Given the threat of protectionism in developed markets and the costs of compliance in emerging markets, trading companies could be forgiven for not knowing where to turn. Michael Duval, Chief Business Officer at Bank Leumi (UK), looks to Israel as a country with relatively untapped potential – and argues for the need for a knowledgeable banking guide.

A decade on from the impact of the global financial crisis, global trade is still in a state of recovery. While the World Trade Organization (WTO) has noted growth reaching 3.6 per cent in 2017 (a welcome recuperation after just 1.3 per cent recorded the year before) the rate looks likely to fall back again in 2018, to 3.2 per cent.

Weighing down on trade’s recovery, of course, is the risk of protectionism, which seems to be rearing its head in developed markets. Over the past year, the WTO has repeatedly issued warnings over the risk that protectionist rhetoric could turn into action – and bring negative consequences for commerce.

Meanwhile, the costs of compliance with increasingly robust regulatory regimes, such as AML, CFT and KYC, have led to many banks derisking from emerging markets. Yet importers and exporters still need to find new, resilient markets for trade. Caught in this dilemma – between possibly protectionist developed markets and derisked emerging markets – where are the untapped opportunities?

Israel could be the answer

Known as the “Start-up Nation” (for its rapid economic success) Israel could well be the place trading companies are looking for.

Like other countries in the OECD, Israel boasts a strong sovereign credit rating (“A+” from S&P, “A1” from Moody’s and “A+” from Fitch). Yet, unlike many other developed markets, Israel is growing – fast. According to the IMF, Israel’s GDP growth clocked at 3.1 per cent in 2017, having reached 4 per cent the year before, and is estimated to hit 3.4 per cent in 2018. This puts it consistently above the average for the OECD as a whole (see chart).

The country’s population is also rising at a rate which, according to the World Bank, far exceeds the global average – meaning a deep market of consumers and considerable human capital. 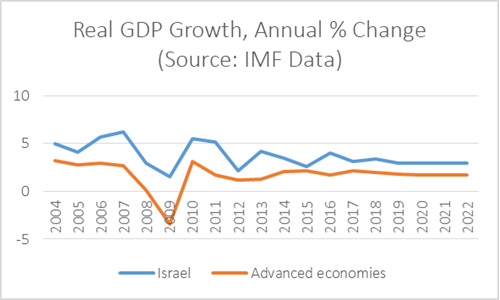 A good example is the potential offered by the UK-Israel trading corridor, where companies could build on a strong track record across a range of industrial sectors. On the one hand, Israel offers British exporters a vibrant, developed market of consumers for their goods – notably machinery, vehicles and aircraft – not to mention the additional ease of shared language, culture and access to financing from a mature and sophisticated banking sector.

On the other hand, the UK itself benefits considerably from Israeli imports: from agricultural goods, precious metals and stones and chemical products, to electronics, machinery, pharmaceuticals, cosmetics and medical equipment – not to mention its world-renowned hi-tech and software. Most of Israel’s foreign investment in Europe finds its way to the UK, where more than 300 Israeli companies operate – 10 per cent of which are listed on the London Stock Exchange. And, of course, as Israel’s largest trading partner in Europe (and second-largest worldwide), Britain plays a vital role as a forward base for many Israeli companies keen to take advantage of time zones and reach markets further afield.

Back in 2011, in fact, a UK Government white paper, “Trade and Investment for Growth”, recognised such potential. It cited companies’ ability to “exploit the potential synergies between Israel’s high levels of innovation and British strengths in design, business growth and finance, as well as the UK’s own high technology and scientific strengths”.

exploit the potential synergies between Israel’s high levels of innovation and British strengths in design, business growth and finance, as well as the UK’s own high technology and scientific strengths
UK Government white paper

Unsurprisingly, in the years since, the volume of bilateral trade has gone from strength to strength – reaching around £6.9 billion in 2017. That represents an increase of about 25 per cent from the £5.5 billion recorded the year before. And in the past two years alone there has been a 28 per cent increase in the numbers of Israeli companies setting up shop in Britain. They have brought with them a 33.5 per cent increase in investment levels, and supported a 12.8 per cent increase in UK-based jobs. Just this year, for instance, Bank Leumi (UK) financed the £14.75 million acquisition of Blackburn-based flavours company Flavours & Essences by Frutarom, a growing Israeli fine ingredients company.

Leading the way to the Start-Up Nation

So far, so good. But if they are to tap the potential of the UK-Israel trade corridor, companies still need a bank that can guide them through it. Despite the benefits on offer, this trade route is likely to be unfamiliar territory for the majority of exporters and importers. For example, while actual payment or credit risks in Israel may be low, unfamiliarity can present a hurdle to trade – increasing the perception of risk and lowering confidence.

Bank Leumi (UK), however, is at home in this corridor. As the British subsidiary of Bank Leumi (the largest bank in Israel) it maintains close links with the financial hub of Tel Aviv, and is thus able to offer companies intimate knowledge of the Israeli market.

Crucially, Bank Leumi (UK) remains unique in that it is an independent bank – not a branch. UK-regulated, the Bank is firmly rooted in London, and has been since its establishment in 1902. As such, it is in a prime position to facilitate bilateral trade flows between Britain and Israel.

A specialist by nature, the Bank has considerable experience in meeting the trade and commercial finance needs of its clients engaging in Israel-related operations. Whether importing or exporting, clients can take advantage of Bank Leumi (UK)’s strengths across the full range of industrial sectors – from food, clothing and cosmetics to capital goods, software and satellite technology – as well as a bespoke trade finance offering, including letters of credit, guarantees and documentary collections.

Committed to accompanying companies’ international and domestic growth, a close relationship with Bank Leumi (UK) also provides clients with a range of commercial finance facilities from £2.5 million, including working capital finance and acquisition finance, along with comprehensive treasury services.

In an environment of global uncertainty, Israel may be the market that is “just right” for trading companies. With a bank that knows its way around, they could be well placed to tap its potential.